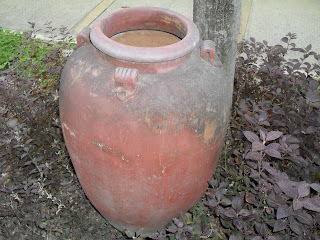 vote casted: i'm happy & proud that i did it!

Oh yeah! For the first time in my entire life, I was able to exercise my right to vote. 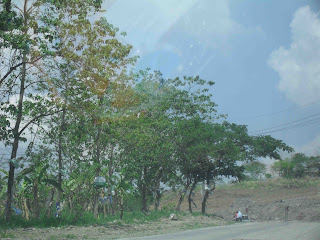 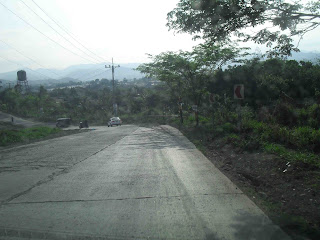 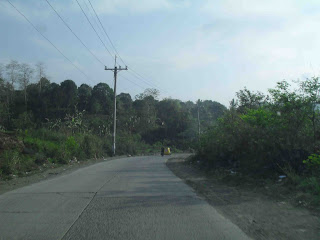 I arrived there at around 7:30am at super dami na ng taong nakapila. Pagkatanaw ko pa lang na sobrang dami na ng tao, considering na ang aga-aga pa, eh parang gusto ko nalang mag back out. But my mind & my heart told me that I really have to do it for the future of my daughter, my family, our country and our future! 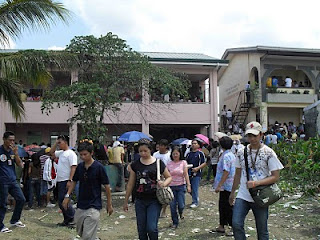 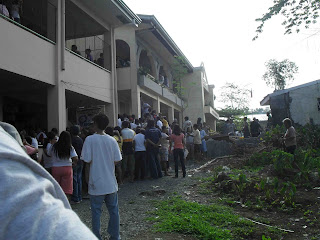 I was assigned at cluster 76 with 4 clusters combined. And compared to other clusters na nakakailang ikot na ang pila eh medyo lucky pa rin naman ako. Though I lined up for almost 3 hours din before I was able to cast my vote. 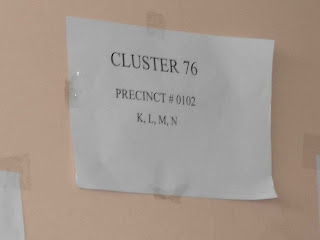 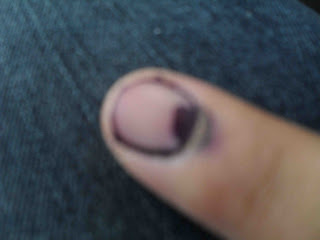 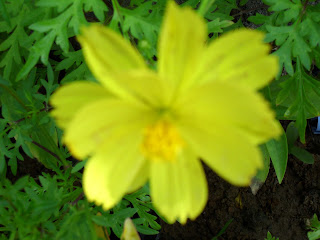 Today is the big day – Election Day! Today is the most controversial day but also the most important day for all the Filipinos. Coz today, we, Filipinos will be deciding who will lead our country for the next 6 years.

I hope that amidst all the controversies, confusions and everything, we will still have a clean, honest & credible election. And I am also praying that we may have a peaceful and orderly election.

to all the mommies out there... 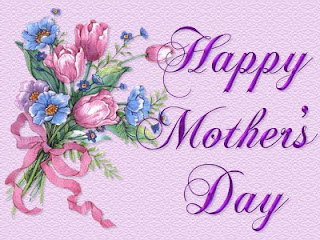 Hundreds of dewdrops to greet the dawn,
Hundreds of bees in the purple clover,
Hundreds of butterflies on the lawn,
But only one mother the wide world over.
~George Cooper~

A mother is the truest friend we have, when trials heavy and sudden, fall upon us; when adversity takes the place of prosperity; when friends who rejoice with us in our sunshine desert us; when trouble thickens around us, still will she cling to us, and endeavor by her kind precepts and counsels to dissipate the clouds of darkness, and cause peace to return to our hearts.
~Washington Irving~

A mother understands what a child does not say.
~Author Unknown~

To all the mommies out there,
most especially to all the blogger mommies in my blog list,
HAPPY MOTHER'S DAY!
at May 09, 2010 3 comments:

Email ThisBlogThis!Share to TwitterShare to FacebookShare to Pinterest
Labels: greetings 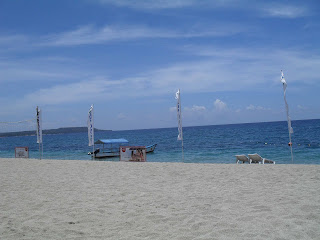 In 2005, when I first joined in this office the team building was held in Blue Coral at Laiya, San Juan, Batangas. In 2006 we had it held in Caliraya, Quezon. Then from 2007 to 2009 we don’t have team building. And for this year, the office decided to have our team building held in Laiya again last 29-30 April.

Our call time last Thursday was at 6:00am but then Filipino time as always kaya nakaalis kami ng Ortigas ng past 7:00am na. And gladly, since I was the first to arrived eh pinili kong sa pinakaharap ng bus sumakay. It took us 3 ½ hours before we reached the venue. 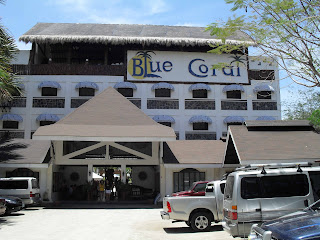 Since pagod sa byahe, hinanap agad namin ang aming room which happened to be at the third floor. Then, picture-picture…. 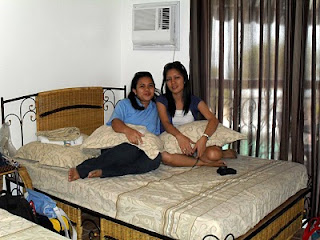 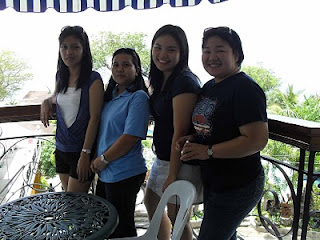 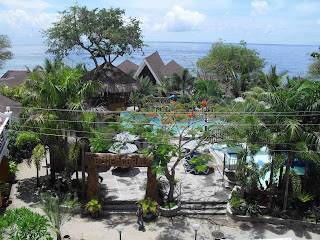 We had lunch at 12nn. Then we rested for a while.
The fun games started at 2pm. We were divided into four groups:
The blue team where I belong 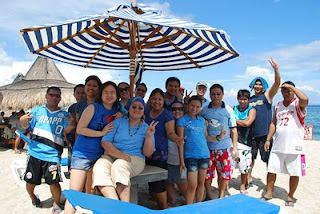 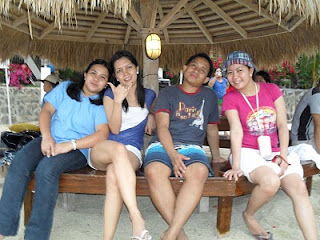 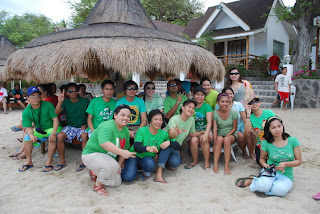 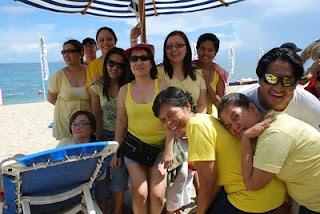 and the red team 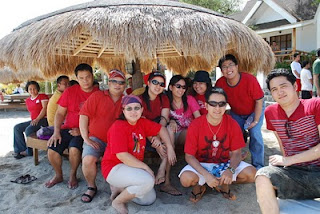 and the game began 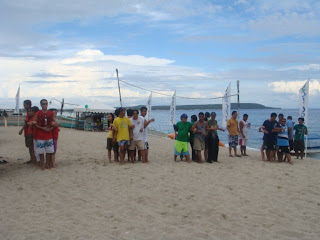 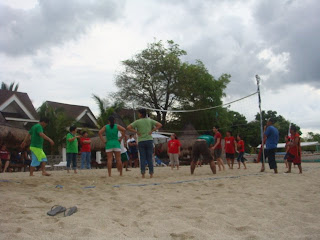 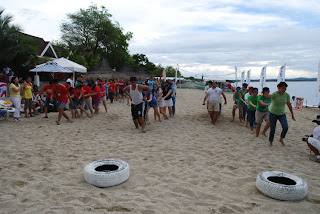 hubz during the obstacle race 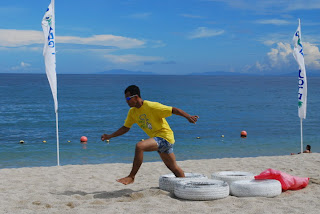 The blue team was the champion on the fun games. yeheeey... pero hindi ako naglaro. hehehe

After the fun games, around 5:30pm, we took rest for awhile. 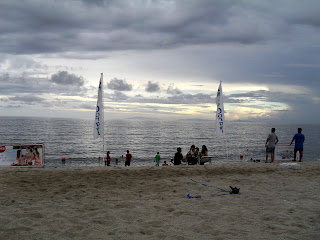 Had dinner at 7pm then we had the unit/department presentation.

Nine groups presented different talents/numbers. Umulan nga lang during that night but we were all smiling & happy. 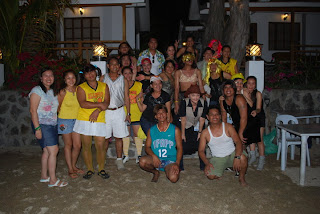 But the star of the night and declared as winner to the group presentation was this group. 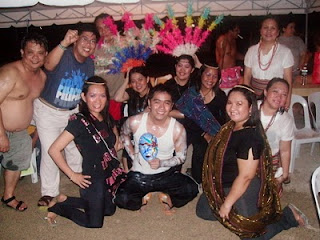 Email ThisBlogThis!Share to TwitterShare to FacebookShare to Pinterest
Labels: just having fun, travel

Last Sunday of May, I got crossed the new Mazda car of my neighbor Ben, a very state-of-the art design imbued with modern technology comforts. The way I looked at his new status I realized that from our urban surrounding surfaced a suburban luxury that many of us in the community felt an amusing asset to possess. We then wonder, how come he was able to avail one with still underdeveloped properties he has. The fluidity of his resources seemed to be a question mark with the ironic limitations that in reality are so vivid.

In one occasion I bravely initiated a conversation with him. And from what we have talked about resulted to a personal loan concept. Ben narrated passionately that he availed the car under a personal loan in a bank with car loan component. Apparently vague to my mind, I requested him to expound further. As he continued, car loan is like a cash advance providing a privilege to get an immediate meeting of certain need. Having the financial resources to prove the viability to pay for the personal loan, Ben was able to fully pay the price required. Elated with the know-how and the pride to have a car, I managed to heed the suggestion of Ben to make an effort of availing a personal loan.

A week after our conversation, I decided to try and furnish the requirements of the bank for the car loan. Luckily, I was able to pass and currently anticipate the excitement to drive one. Looking back, I have realized the value to seek enlightenment in things that are confusing and try to explore possibilities of enhancing present convenience. Thanks for my personal loan, I cannot wait to plunge into travel adventures with my family and make the race track of moving forward.

For now, Ben and I are into a friendly partnership of maximizing other avenues of a personal loan and I hope this could be business opportunity to prosper.
at May 07, 2010 No comments: 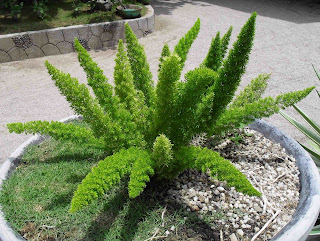 The ability to simplify means to eliminate the unnecessary so that the
necessary may speak.
~Hans Hofmann~

Generosity consists not in the sum given, but the manner in
which it is bestowed.
~Unknown~

"Happiness cannot be traveled to, owned, earned, worn, or consumed. Happiness is the spiritual experience of living every minute with love, grace, and gratitude."
~Denis Waitley~

How wonderful it is that nobody need wait a single moment
before starting to improve the world.
~Anne Frank~

Until we're educating every kid in a fantastic way, until every inner city is cleaned up, there is no shortage of things to do.
~Bill Gates~

There are no strangers here; only friends you haven't yet met.
~William Butler Yeats~

Humility does not mean thinking less of yourself than of other people, nor does it mean having a low opinion of your own gifts. It means freedom from thinking about yourself at all.
~William Temple~

Lead with your fork, not your mouth.
~Bernie Wilke~

In the midst of winter, I finally learned that there was in
me an invincible summer.
~Albert Camus~

Our lives are a mixture of different roles. Most of us are doing the best we can to find whatever the right balance is. For me, that balance is family, work, and service.
~Hillary Rodham Clinton~

The Millennium Development Goals can be met by 2015, but only if all involved break with business as usual and dramatically accelerate and scale up action now.
~Kofi Annan~

It is in giving that we receive.
~Saint Francis of Assisi~

A man is rich in proportion to the number of things he can afford to let alone.
~Henry David Thoreau~

Adults are always asking little kids what they want to be when they grow up because they're looking for ideas.
~Paula Poundstone~


Revolution is not something fixed in ideology, nor is it something fashioned to a particular decade. It is a perpetual process embedded in the human spirit.
~Abbie Hoffman~

Three Rules of Work: Out of clutter, find simplicity; From discord find harmony; In the middle of difficulty lies opportunity.
~Albert Einstein~

Giving frees us from the familiar territory of our own needs by opening our mind to the unexplained worlds occupied by the needs of others.
~Barbara Bush~

Yoga teaches us to cure what need not be endured and endure
what cannot be cured.
~B.K.S. Iyengar~

Poetry is plucking at the heartstrings, and making music with them.
~Dennis Gabor~

Wherever there is a human being, there is an opportunity for kindness.
~Seneca~

Let us be silent, that we may hear the whispers of the gods.
~Ralph Waldo Emerson~

The universe is change; our life is what our thoughts make it
~Marcus Aurelius~

I've learned that I get blocked when my subconscious mind
is telling me that I've taken the work in a wrong direction, and that once I
start listening to what my subconscious is trying to tell me, I can work out the
problem and get moving again.
~Walter Jon Williams~

Quote of the day